I've made some materials shifts during these summer months and also tried to open up some new lines of work.  I've been painting so as not to judge my mark making choices particularly as I begin a piece and I'm looking for some sort of organization to reveal itself as my process proceeds.

Maybe that's the way I've always done things but I feel I'm trying to be more mindful, see things in the moment and be aware of revelations in color, contrast and shape.

As for the materials, much more acrylic than oil although when it comes to canvas I prefer both.  Acrylic to set the field so to speak and oil over to pull it together.  Well, that's the objective anyway if  "together" isn't always the result.

During this month of July I've used about 15' of yupo paper, almost 6000 sq inches of the stuff to make a 60" square piece and maybe a dozen smaller ones.  The surface really appeals to me!  Very little resistance, none actually, nothing absorbed like paper sometimes does, and otherwise just easy to handle. Tape it to the walls in my studio and go.

Also in July I've worked to complete six 36" square canvases, and I think several are done!! I've approached a gallery or two about submitting exhibit proposals but find all of that takes me away from making.  That part of being a painter still daunts.  Plus, the proposal writing itself.  And, yes, taking the time to think about what the work is "about"?  Ohhhhhhhh. True confessions of a tormented picture maker!

So, I'll push to make an exhibit or two happen this fall season.  I showed work in Greenfield at the Pushkin Gallery during a musical performance by my friend Tess and her band mates which was great and exhibited during the month of June at the Hawks and Reed Performance Center, also in Greenfield.

I'm in the early stages of designing a teaching program to offer later this year and enjoying developing relationships with staff at the River Gallery School in Brattleboro.  Although nothing has been finalized I anticipate a working collaboration with the school to evolve during the remainder of 2019.  Fingers crossed.

The Shea Theater in Turners Falls has asked me to exhibit work in the second floor lobby area of the
renovated performance space beginning in August.  I've been working with Pivot Media in Florence
to create two 40+" abstract images to mount on stretchers or on board.  They will, I think, be prints from work on yupo I did in the spring and early summer.  The photography and printing skills of Jim Gipe are really special and I appreciate his skill and time.  His enlargements of original work are eye popping in clarity and color.

Here are a few views you won't see on insta or on my website.  Hopefully I'll be back here soon!! 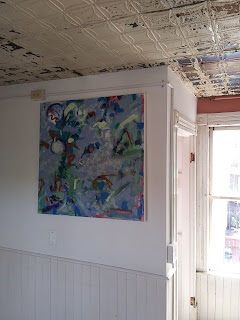 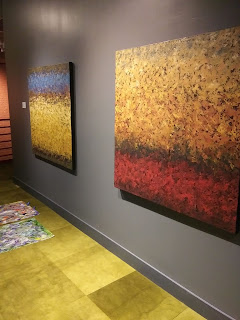 Second Floor Lobby
Shea Theater
Where I'll hang my work beginning in August
Jim Skillicorn's work has been there for several years!!

Robert Mace Bent
Franklin County, Massachusetts, United States
Art work of one kind or another has always had a place in my life. While living in Texas in the 70's I began taking art classes at a university and a local museum, got accepted to university art programs in Colorado and Massachusetts and ended up in the East. Art school didn't last too long for lots of reasons; moved to Indiana, worked for some lawyers and ended up going to law school. I've finially put the practice aside and now devote substantially more time to painting and drawing.